You are here: Home / Rescue Stories / One for the Wildlife Newbies

Each of us who embarks on wildlife rescue begins with reservations about whether we can do the job. Will I be able to catch that animal? Am I capable of caring for that bird? What if I make a mistake and hurt the creature? It seems like there’s so much to learn.

If this is how you feel, don’t worry. Everyone feels that way when they start. The thing to keep in mind is that you’re not alone. Your wildlife organization has plenty of experienced carers and help is just a phone call away.

When I faced my first wild bird capture I was totally freaked out. It was an Australian Scrub (bush) Turkey with fishing line wrapped tightly around its toes. The line had cut deeply and the bird was limping and obviously in pain. 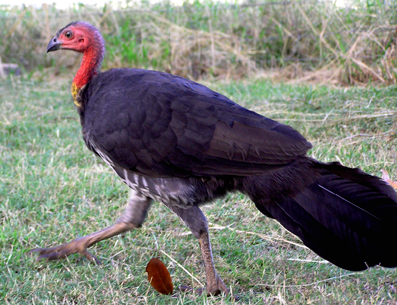 Most would probably think that someone with an extensive (and shameful) past history of shooting, fishing, and spear fishing would be unfazed at the thought of catching a single bush turkey. But that wouldn’t be true. Those bad old days of hunting for ‘sport’ were over and my attitude to all creatures had changed. Now my chief concern was whether I might injure the bird, and of course I didn’t want to get injured myself.

At the time I was camped in a town north of Bundaberg, in Queensland. The bush turkey came around every morning at about 6am when most of the other campers were still asleep. I was determined to catch and help it.

My first plan involved several fellow campers. First we cornered the turkey. Then we attempted the old ‘throw the net over the bird’ trick. That was really successful … not. The turkey took one look at our net and promptly flew into the nearest tree. Bush turkeys may look silly but like most species of bird they can move like greased lightning if someone attempts to throw a net or a towel over them. Clearly a more sophisticated approach was needed.

Off I went to the local hardware store with a list of the items to construct a trap. Three meters of netting; several meters of cord; a length of electrical conduit; some wire, and of course bait – in this case mince; irresistible to a bush turkey. Luckily I already had the necessary tools to build the trap.

If it sounds like this project was becoming a tad complicated, you’d be right! A Space Shuttle launch would have been easier. In fact if I’d known then, what I know now, I could have caught, treated and released that turkey in less than two minutes, at no cost. I spent the next several hours designing, building and testing my new trap. 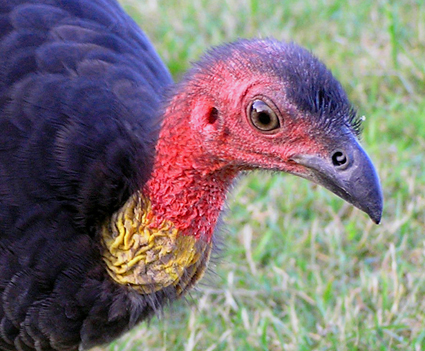 The idea was to get fully set up by first light, before the turkey arrived. My plan was to throw food in front of the trap then quickly pull on the cord. This would cause the net to swing over and trap the creature inside. At least that was the plan.

At 5.30am next morning the campground was dead quiet. It was chilly and a mist hung in the air. My trap was in place and I was ready. All I needed was the turkey. I wasn’t sure how this was going to play out. I was even less sure about what to do when (if) I caught the bird. An adult bush turkey looked like a powerful creature to me. They have strong beaks; huge thighs and long powerful claws. Did they squawk loudly? I didn’t know but figured if they did I’d almost certainly get lynched by my fellow campers who were all fast asleep. This could get ugly.

Finally the creature arrived. It responded immediately to the bait and moved in closer to the trap. It took one step too close and I heaved on the cord. The trap swung shut and all hell broke loose. I dived on the bird. Shit! What do I do now?

The local wildlife carer was supposed to be there at 6am to help me. Turns out she had punctuality issues and wouldn’t arrive for another hour. I didn’t know what to do so I just lay there on top of the bird, not daring to move. Time went by. Ten minutes, then twenty. This was ridiculous. Thirty minutes and I heard a noise behind me. I looked up and saw a camper on his way to the loo. He was a crusty old fisherman. It was clear from the look on his face that he found the scene before him disturbing – a man prostrate in the wet dirt alongside a big puddle, spread-eagled over a large undulating lump. I looked up meekly and asked, ‘can you help me mate; I’ve caught a turkey’?  His response was predictably cautious.

After a thorough explanation which eventually established my sanity he jumped in and helped. Together we wrangled the bird into submission. That’s when the wildlife carer arrived – thank God. We loaded the turkey into her car and she sped off home to treat its wounded toes.

This had been an elaborate and rather expensive capture – one that could have been handled quickly and easily if I’d known what I was doing. But that was nine years ago. Back then I knew very little about catching wild birds and nothing about bush turkeys. Believe me I know stuff now. No doubt that will come as very welcome news to all bush turkeys.

One thing I’ve learned about wildlife rescue is that you can never really know what’s going to happen during a capture. This mustn’t deter you. In fact it can make the whole adventure more exciting. Remember that even the most experienced rescuer was a nervous newbie at one time. It’s amazing how often providence smiles upon a newbie that is willing to give it a go.