You are here: Home / Capture Record

Since 2005 I have provided a free rescue service for injured native birds on the Gold Coast. During that time thousands of wild birds that would otherwise have suffered a miserable death, or been left seriously injured or maimed, got the help they needed. This is a unique service because I specialize in catching ‘flight capable’ birds. I’m the only full time rescuer along this 50 kilometres of coastline who can catch these birds.

(Scroll down to read the latest monthly Capture Report. Note … donors who gift $25 or more are automatically sent the next 12 reports)

While conducting wildlife rescue work in 2017 I took more than 2000 phone calls; drove 25,000 kilometers; attended 531 rescues and caught hundreds of sick, injured or orphaned birds. I haven’t done a detailed breakdown of the species rescued since the 2015 year but at the time this included … 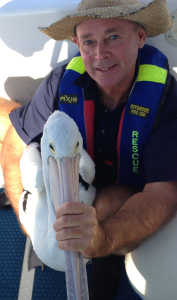 Most rescues can be completed in two to three hours, but sometimes it can take days or even weeks just to track down and catch one bird. That time increases when hospitalization is needed along with release at a later date. Then there is administration, web commitments and time attending the phone. Even though WBR is a free service and no wages are paid the financial cost of providing all this is considerable.

If you love wildlife and would like to assist this unique rescue service please visit the Donations page and make a contribution. Any amount, no matter how small, is greatly appreciated and helps to ensure that emergency support is available for sick and injured birds, 7 days a week. Your help makes all the difference.

A BIG thank you from me and the birds.

Beginning July 2014  I’ve posted a monthly Capture Report so that supporters can follow the activities of Wild Bird Rescues GOLD COAST. Each report contains pictures and inspiring stories about birds that were saved during that month, plus any special activities of the rescue service.

Hi Everyone, Rescue numbers were up in July with a total of 42 sick or injured birds receiving help. Swans took the brunt of it with 18 having to be rescued and another two that I released. We managed to save most of those swans, however 3 had a particularly torrid time. The first story… [Read More]

Hi Everyone, With only 23 rescues attended in June things were quiet, at least on the rescue front. In fact everywhere was quiet. The RSPCA wasn’t too busy and Currumbin Wildlife Hospital had days when they sent volies home and permanent staff were left twiddling their thumbs. This was great of course because it meant… [Read More]

Hi Everyone Rescues were steady during May with WBR attending 31 sick or injured birds. It was a mixed bunch although the pelis experienced more than their fair share of drama. To Act, or Not to ActA question often faced by wildlife rescuers is whether an injured creature should be caught and taken to hospital,… [Read More]

Hi Everyone Activity picked up in April with Wild Bird Rescues attending 34 sick or injured creatures. This is a manageable number and down from last year’s monthly average of 44 rescues. Last year was crazy so this year I’ve tried to keep the numbers in check by reducing non-essential rescues (i.e. rescues that can… [Read More]

Posted in Capture Record | Comments Off on Capture Report, April 2019

Hi Everyone, Rescues of sick and injured birds during March totalled 24. The number would have been higher except that a few days into the month I had my bi-annual ‘rescue meltdown’ where everything becomes too much and I can’t see a way forward. I immediately arranged to have a few days off but it… [Read More]

Posted in Capture Record | Comments Off on Capture Report, March 2019

Hi Everyone Rescues got off to a brisk start in February then the cyclone turned up off the Goldie and everything came to a grinding halt for 5 days. That’s good of course. The less birds in trouble the better. In the end WBR completed a total of 27 rescues for the month. Not a… [Read More]

Posted in Capture Record | Comments Off on Capture Report, February 2019

Posted in Capture Record | Comments Off on Capture Report, January 2019

Hi Everyone, The closing month of 2018 saw WBR complete 31 rescues. This was up on previous months but still well below the annual monthly average. In fact around 30 rescues per month is where I want to be. Swans took the biggest hit in December making up nearly half of all birds rescued (13)…. [Read More]

Posted in Capture Record | Comments Off on Capture Report, December 2018

Hi Everyone, November was steady at WBR with 25 birds attended, yet there was no shortage of action. Fish hooks, fish hooks everywhere Hookings continued, as they always do. In this case it was a cygnet from a family of five which some idiot had caught then cut loose to swim away with a very… [Read More]

Posted in Capture Record | Comments Off on Capture Report, November 2018

Hi Everyone, October was steady at Wild Bird Rescues with 30 sick or injured birds receiving help. In fact, exactly the same number of rescues as last month. A Bird in the Hand Spotter Sandy (of the flaming red hair) pulled off a specky catch when she sidled up and pounced on this peli. Sandy… [Read More]

Posted in Capture Record | Comments Off on Capture Report, October 2018